Be the Street was a regional litter abatement program developed by the Bay Area Stormwater Management Agencies Association (BASMAA). The program wanted to target 14-24-year-old Bay Area youth who had been identified as a key polluting demographic.

Be the Street sought to tackle the challenges of convincing Bay Area youth that it was “cool” to care about where you live and not only stop littering and polluting water sources, but become advocates to convince peers to do so also. The campaign used a single umbrella brand under which a wide range of initiatives were implemented, tested, and analyzed to identify what was and was not working in terms of motivating the target audience of 14-24-year-old students in the Bay Area.

We knew at the outset that Be the Street would have to be a hybrid online-offline campaign. The target audience was not going to come seek out “hip, cool litter abatement programs” so we had to go to them. That meant schools, campuses, community fairs, art shows, and the streets themselves. In all the messaging, we made sure to talk with them, not at them.

Literature reviews and focus groups showed that the target audience was inherently resistant to messages coming from authority figures. As a result, a top-down messaging approach would never work. Instead, the umbrella brand used a wide range of influencers from the community who were already environmentally motivated and allowed them to deliver the message in their own words through a peer-to-peer network. 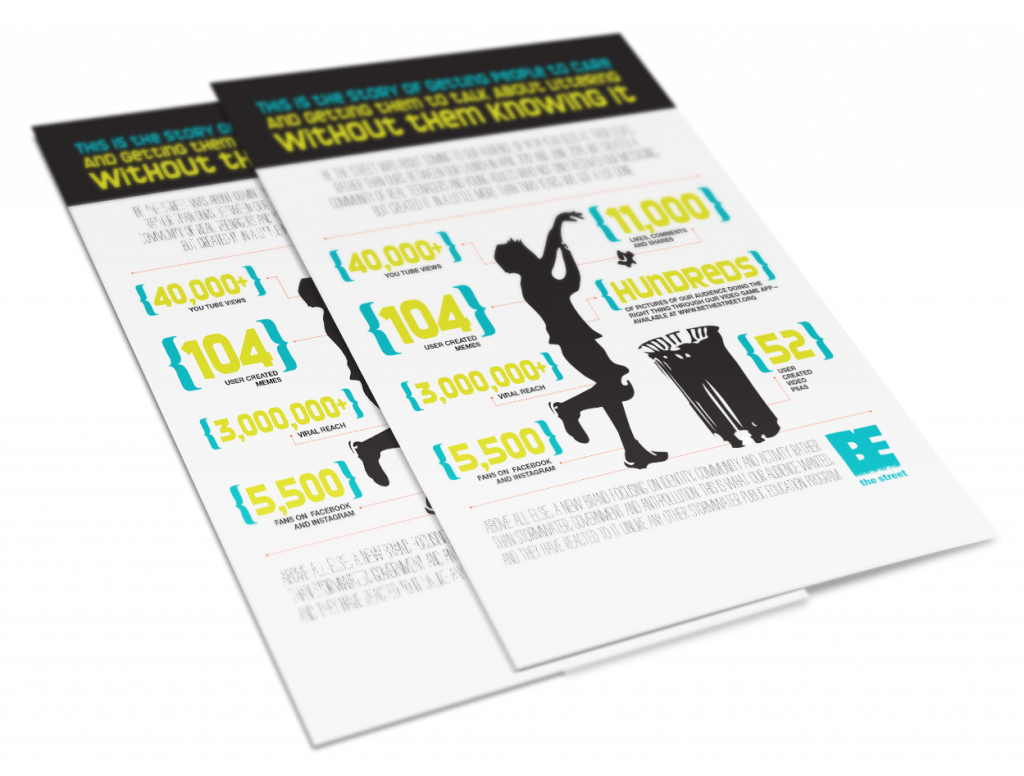 The true trick of the campaign was designing a brand that resonated across the entire audience—then wielding that brand. To engage with our target audience, SGA employed the following tactics:

Facebook was the heart of the engagement because it was how the target audience chose to communicate. We developed a deep understanding of what resonated with them (surprisingly, it was messages of profound optimism and food). Facebook was a key tool because it let our target audience co-opt our message and share it with their friends, what we’d call our “adjacent possibles,” or people we wanted to reach but weren’t able to just yet.

Whenever possible, the best messaging is when the target audience puts it in their own words or Peer-to-Peer messaging. Rather than develop our own PSA, we created a $1,500 prize purse and got 52 video entries on our YouTube channel. The entries, ranging from not-so-great to shockingly impressive garnered more than 40,000 views as nominees went out and promoted their own video to their own network of friends in the hopes of winning the prize.

Be the Street engaged with the target population primarily through social media (e.g. Facebook and Instagram) to deliver inspirational and educational content. An innovative set of outreach strategies included a YouTube video contest with a live stream award show and a meme contest.

The impact of these outreach strategies were reflected through the breadth of Be the Street’s engagements and through a baseline and follow-up survey.