In order to achieve community support and buy-in for this stormwater diversion project, the City of Santa Monica needed to communicate the project benefits to the surrounding community, school district staff and various civic organizations.

The Los Amigos Park Stormwater Harvesting and Direct Use Demonstration Project was a collaborative effort between the City of Santa Monica, the Santa Monica Malibu Unified School District and the Metropolitan Water District of Southern California. Rather than discharging polluted waters into the Santa Monica Bay, this project reduced pollutant loads, offset potable water use and used urban runoff as a resource. The project would annually treat up to 100,000 gallons of stormwater and nuisance dry weather runoff for non-potable irrigation and indoor flushing and replace up to 100% of the previous potable water use.

The main outreach message was that this project would help create a better and more sustainable Santa Monica. To ensure community buy-in and approval, SGA purposefully created a campaign tone that was helpful, accessible (avoiding any jargon), transparent and progressive.

We identified two primary resident experiences and focused our messaging around these two experiences:

(How will this affect my school, my neighborhood, my commute?)
Most of the targeted audiences were interested in the details of dates and closures so they would not be inconvenienced. SGA recommended setting clear, conservative expectations about what would change during construction. We wanted the residents’ perceptions and realities to be consistent and in the end, the project was less inconvenient than they had expected.

SGA started communicating and coordinating with stakeholders prior to the start of the project to increase community awareness, as well as afterwards, to provide an opportunity to receive community comments. We coordinated with the School District and Principals to identify target dates for the community meetings and to reserve meeting space in the community. We also provided the School District Community and Public Relations Officer with sample language they could incorporate into existing communication channels to promote the meetings and maximize community involvement. 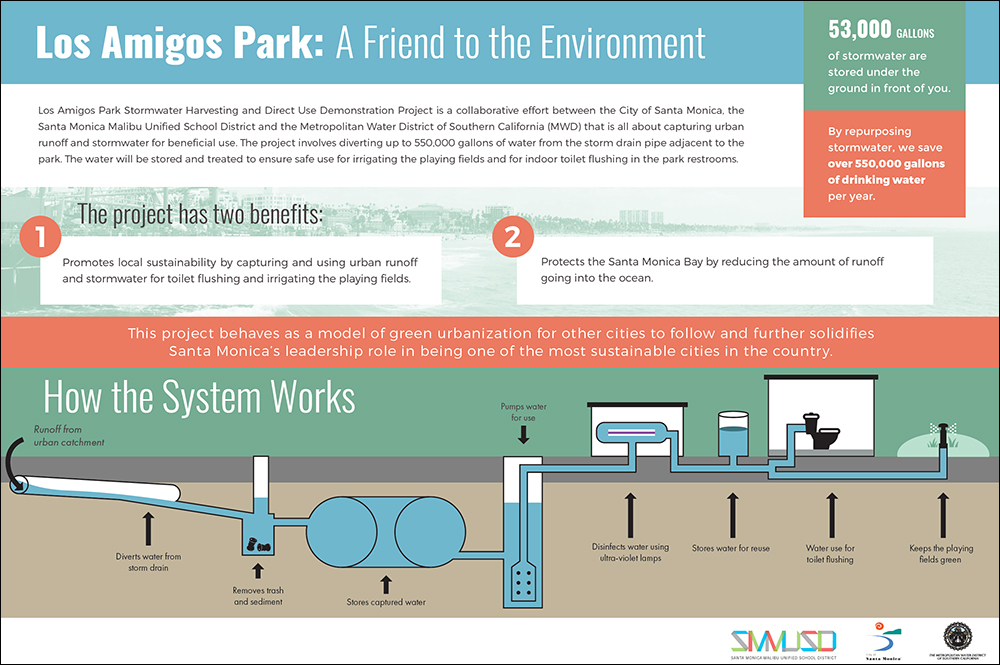 In addition to community meetings, materials were developed such as permanent signage that communicated to residents how the rainwater harvesting system works. During the project, public notices and signs were placed on the site and an informational postcard was distributed to the community. SGA also developed the same materials in Spanish for Latino community outreach.